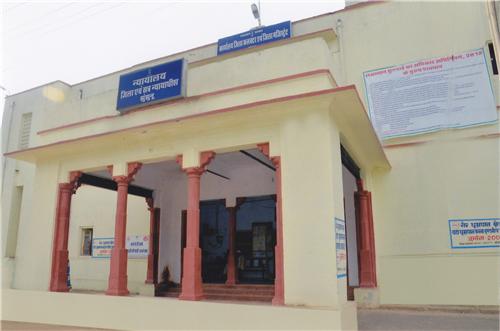 Jhunjhunu is the administrative headquarters of Jhunjhunu District in Rajasthan. Therefore, the city has immense importance from administrative point of view. The office of the District Magistrate, who is the senior most government officer in Jhunjhunu, is located here. However, the civic administration is provided by the local municipal council or Nagar Palika.

Office of District Magistrate in Jhunjhunu

As in rest of the country, the District Magistrate in Jhunjhunu is variously known as District Collector, Deputy Commissioner etc. He is generally the most influential officer of this district and has to perform multipurpose duties. In his capacity as District Collector, collection of taxes and revenues, distribution of agricultural loans, assessment and acquisition of land etc falls under his set of duties. Then again, as District Magistrate, he has to see that law and order is maintained within his jurisdiction. He also as some quasi judicial power and has to hear cases under some specific section of Criminal Procedure Code. Moreover, disaster management, supervision of jails etc also fall under his jurisdiction.

The Office of The District Court and Administration is located on State Highway 37. In case of emergencies, one can contact the DC through the following phone numbers:

However, the District Commissioner is assisted in his work by a team of government officers. Following are some of the important phone numbers relevant to Jhunjhunu town:

Although the District Commissioner is in over all charge of the town, the civic amenities in Jhunjhunu is provided by its Nagar Palika in collaboration with the state government. Just as in any town in India, the Nagar Palika is entrusted with the health and hygiene of the residents. Consequently, supply of purified drinking water, removal of garbage, arrangement of public vaccination etc falls under its jurisdiction. Moreover, the Nagar Palika is also entrusted with maintenance of public places such as roads, markets, parks etc.

As in rest of the country, the Nagar Palika in Jhunjhunu is run mostly by elected representatives. For effective administration, the city has been divided into 45 wards each of which are represented by an elected councilor. A board formed out such elected members runs the municipality.  However, it also has some ex officio members nominated by the state government.

The judicial history of Jhunjhunu began in 1951 with the establishment of Civil Judge (Senior Division) Court at Jhunjhunu. At present it has six courts set up over a period:

Other than the above courts, a permanent and continuous Lok Adalat has also been installed in the Session Division Court. At the beginning, the judicial cases of the Sikar District were also heard in Jhunjhunu. However, 1976, separate court was established in Sikar. This has decreased the load on Jhunjhunu courts and enabled speedier trial.

Jhunjhunu, being a district headquarters, also has a District Jail located on SH 41. It is a B Class jail under the administration of Deputy Superintendent. The Jail has a legal Aid Cell, established by Rajasthan State Legal Aid Authority. Its job is to provide legal assistance to those prisoners who cannot afford such services. To avail such facility an inmate or his/her relatives must contact the jailor. The prisoners of this jail also enjoy all other facilities and rights conferred on them by the law of the land.