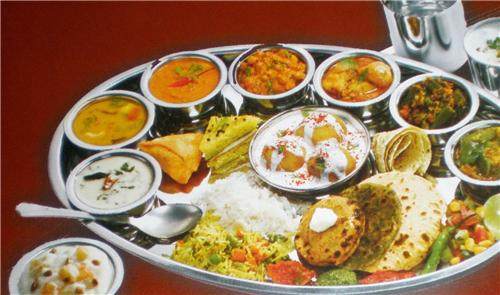 Jhunjhunu is located in a semi desertic area of Rajasthan. Even few decades ago, the areas around the town lay barren.  There was not only lack of freshly grown vegetables, but fuel too was in short supply at that time. Such shortage of vegetables and fuel has left a deep impression on the food habit of this area. In general, people here prepared food that would last for days and could be eaten without reheating.

However, life as well as food habit has changed a lot since those days. Thanks to the modern technology, the area now grows different kinds of food crops and this has made a major difference with the food habit of the people. Moreover, interaction the outside world too has its effect on it. While traditional Rajashthani cuisine is offered in most homes, the people here have also learnt to appreciate other kinds of food.

It is a misconception that people of Rajasthan are basically vegetarian. While it is true that a large percentage of the population in Jhunjhunu does not take non-vegetarian food items, not everybody in this town is a vegetarian. A large percentage of Muslim population who has been living here since fifteenth century AD habitually consumes non vegetarian food. Besides, many warrior tribes also take meat regularly. However, some major communities of Jhunjhunu are strictly vegetarian.  Therefore, if you order Rajasthani Thali at any restaurant it may consist of vegetarian dishes only.

Moreover, the food in Jhunjhunu was traditionally prepared with clarified butter and therefore, it was high on calorie. Today however, refined vegetable oil is also used. Moreover, along with the traditional Rajasthani food the residents of Jhunjhunu have also started taking Punjabi, South Indian, Chinese as well as Italian dishes.

Some Typical Food in Jhunjhunu

It is a fact that food habit of any community is formed by the materials traditionally available in their native place. Most dishes in Jhunjhunu have liberal sprinkling of what was available before green revolution took place. Thus gram flour, dried lentil beans such as kair and sangria is used liberally to prepare dishes in Jhunjhunu. Incidentally sangria is dried leaves found in the wild while kair is a small round fruit, which grows on prickly shrubs in the desert. I must also add that the camels too like kair a lot.

Another unique point is that in Jhunjhunu, the sweet dishes are served at the very beginning; diners eat them before, after and even during the meal. There is nothing called desert in this cuisine. The dry climatic condition of this region can be one reason for such a unique tradition.

If you want to taste delicious Rajasthali Thali at an affordable rate you must try it at Rani Sati Mandir. The temple provides sumptuous lunch as well as dinner at a nominal rate. Besides, there are many other restaurants in Jhunjhunu, which offer good Rajasthani Thali. Eateries in Jhunjhunu are also famous for different kinds of snacks called chats and namkeens. One should also try different types of sweets available in Jhunjhunu. Apart from delicious Rajasthani sweets some of the shops in Jhunjhunu sell delicious Bengali sweets. In short, as far as food is concerned visitors to Jhunjhunu now have a wide choice.