Jhunjhunu, located in the Sekhawati region of Rajasthan, has recorded history of one thousand years. During this period the land was ruled by kings of different dynasties. In the beginning it was the Chouhan dynasty, which reigned over this land. Then in 1450, Mohammud Khan defeated the Chouhans to establish Muslim rule. Again in 1730, Thakur Sardul Singh usurped the throne to establish his own dynasty. A British Commander called Major Henry Forester became the virtual ruler for a brief period.

Nonetheless, all these kings and nawabs had one thing in common. They all built many forts, palaces, temples, mosques, cenotaphs. While many of them have been destroyed some of them still stand to tell us about days gone by.  We will start our tour with a visit to the Khetri Mahal. 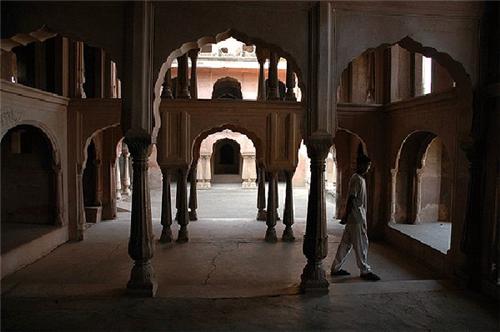 Among all the historical edifices, the Khetri Mahal is said to be the finest specimen of Sekhawati architecture. This wind palace was built in 1770 by Bhopal Singh, who was the grandson of Sardul Singh. Bhopal Singh was also the founder of Khetri and hence the name Khetri Mahal. Instead of walls this palace has many marble pillars. Therefore, air can easily circulate through this palace. There is also a ramp leading up to the palace. It must have been built for the benefit of the Rajput kings and noblemen, who used to come riding on their horses. It may not be out of place to add that the Hawa Mahal in Jaipur had been modeled after Khetri Mahal.

Badalgarh Fort in Jhunjhunu is also another important place to visit. It is true that the fort is not as grand as the forts at Amber or Jaisalmer; but one should visit it simply for the fact that nowhere else an entire fort has been dedicated to the animals. Indeed, this fort was built by Nawab Fazi Khan at the end of 17th century as a stable for his camels and horses. 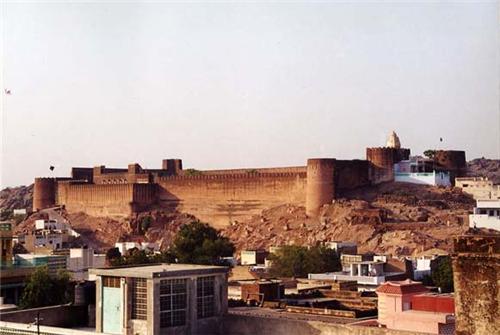 Because the fort was built as a stable the décor here is rather plain; there are no sheesh mahal or other baradaris and pavilions in this fort.  People visiting this fort is often astound with its sheer size and security arrangements. It is actually a grand structure with high and protective walls surrounding it. It goes to show how animals were precious to Nawab Fazi Khan of Jhunjhunu.

However, there is a reason for it. It is to be remembered that Fazi Khan was a Kayumkhani Muslim, whose ancestor Karamchand was converted to Islam by Firuz Shah Tughluq. Since Karamchand belonged to the Chauhan clan, the family is still considered to be Rajput and like true Rajputs, they too were great warriors who fought many battles and took great care of their animals. Indeed, no one else might have built an entire fort for proper upkeep of war animals, but in general Rajputs had always taken good care of their animals. May be that is because horses and camels were an important part of their rishala (cavalry). In this perspective, it seems quite natural that Nawab should have built an entire fort for upkeep of his animals. 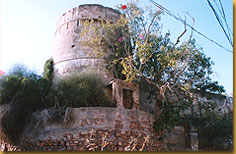 Jorowargarh, also known as Zorowargarh, is a fort built by Zorowar Singh in 1741. He was the eldest son of Thakur Sardul Singh and became the king after the expiry of his father. In its heyday, the fort must have been a grand structure, but today most part of it in ruins. The Zenana Complex, which housed the ladies of the royal family, is now completely broken. However, some portion of the building has been renovated to hose the District Jail as well as some other government offices.

The town has a number of cenotaphs, also known in Hindi as Chhetri, built in memory of the kings. A cluster of such chhetris dedicated to the sons of Thakur Sadul Singh, still stands today. However, now a school is being run in that complex. Once upon a time, the chhetris were decorated with murals. There were many inscriptions n the walls. Although some of those are still visible on the inner walls, most have been destroyed.